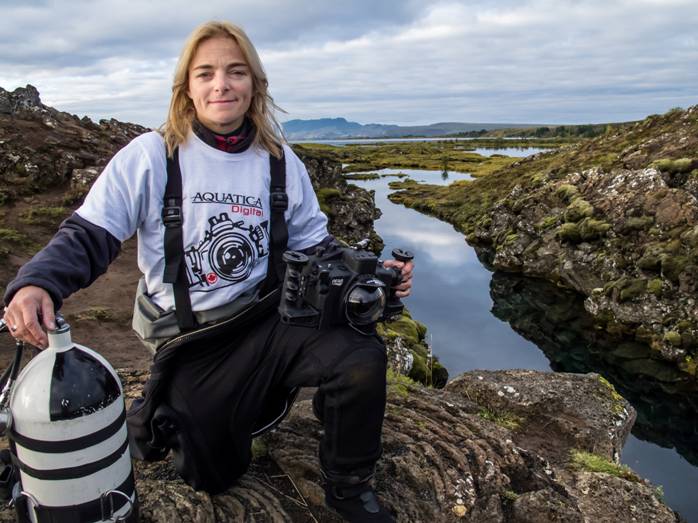 Nathalie Lasselin, a long time Aquatica and Amphibico users, is a professional director of photography and underwater camera operator for feature films, music video and various film production. Having learn her craft at the NFB (National Film Board of Canada) she has produced and directed documentaries who won numerous awards all over the world. She shares her love and curiosity through films, articles, conferences and training. She is also a technical and full cave diving instructor.

Here is a write up on the Aquatica AE-M1 4/3 Micro series housing for the Olympus OM-D E-M1 and some images shot with it in Iceland:

“I’ve been passionate about the secrets and treasure under the surface. One of the most important nowadays is the ground water.  With Aqua Sub terra, we went to Iceland where we had a chance not only to dive in the clearest water but to drink  one of the purest water in the world, this water from the glacier is filtered through the rocks for decades before flowing between the world known as the Silfra fissure between the continents. I used the Olympus OM-D E-M1 mirrorless camera and the Aquatica Ae-M1 housing for the first time, I am always looking to travel light and efficient to be able to go through small passages. Being used to professional and big cameras, It was a tricky choice, but once you learn how the camera and lenses react, then you’re in business.”